Senator Cardin held a town hall this morning in Franklin Square Medical Center just outside Baltimore to discuss the new Senate GOP health care bill and the Democratic strategy for opposing it. In attendance were members from BMore Indivisible, Indivisible Howard County, members from other activist groups such as ADAPT and Together We Will – Baltimore Area, as well as a number of health care professionals and members from the community.

The Senator spoke passionately and at length about how the process the GOP is using to pass the bill is shameful, and more importantly, how the bill will hurt Americans.  The Senator took questions for almost an hour on a range of issues related to TrumpCare.

A member of ADAPT who has cerebral palsy and was at the yesterday’s protest at Mitch McConnell’s office argued that Senator Cardin was not doing enough to fight the health care bill and urged him to act more forcefully and to support a bill that expands health care benefits that are not currently covered under the ACA. 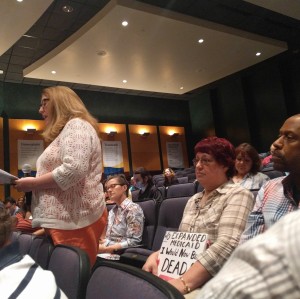 A cancer survivor who relied on the Medicaid expansion and now depends on essential health benefits protected by the ACA asked if she would be allowed to publicly testify in the Senate. Senator Cardin said that the GOP controls the Senate and will not allow it.

An attendee from Indivisible Howard County asked whether it would help if Marylanders called Senators from other states such as Ohio or Maine to ask that they oppose the bill. Senator Cardin acknowledged that Senators prioritize calls from their own states, but “that Senators have hearts too”. He urged people with health care stories to share their stories and put a face on the issue, and assured them it will natter to any Senator, regardless of their state.

When pushed on the issue of procedural strategy and how Senate Democrats intend to fight the AHCA bill by members of BMore Indivisible, Senator Cardin stated unequivocally that Democrats will use every parliamentary tool at their disposal, including withholding unanimous consent to slow down the Senate and introducing amendments in a ‘voter-a-rama‘ process to delay the vote. However, he stressed that because the GOP controls the Senate, these strategies will fail if the GOP has the 50 votes it needs to pass the bill. He emphasized that the only way to truly defeat the bill will be to take the debate to the public and pressure GOP senators to vote against the bill.

After the town hall, Senator Cardin remained in the auditorium to speak with attendees. We thank the Senator for taking the time to participate in this town hall.

Update: Coverage of the event by WBAL-TV.