Members from local Indivisible groups, including several from BMore Indivisible attended a rally in Lafayette Square yesterday outside the White House organized by CASA and United We Dream. Although overcast and raining at the start of the rally, the weather soon cleared up and the crowd swelled to over a thousand. The crowd was a diverse mix of many races and ages, including groups that drove or bused in from neighboring cities like Baltimore, that all stood united in support of the DACA program.

During the rally, immigrants shared there stories of how DACA enabled them to live in the US, and how proud they were to be able to call themselves Americans. A mother from Baltimore spoke about how she lived in the US for decades and how life-changing it was for her children were able to enroll in DACA. Teenage children of immigrants, representing the over 800,000 protected by DACA introduced themselves and asserted their right to live in this country. 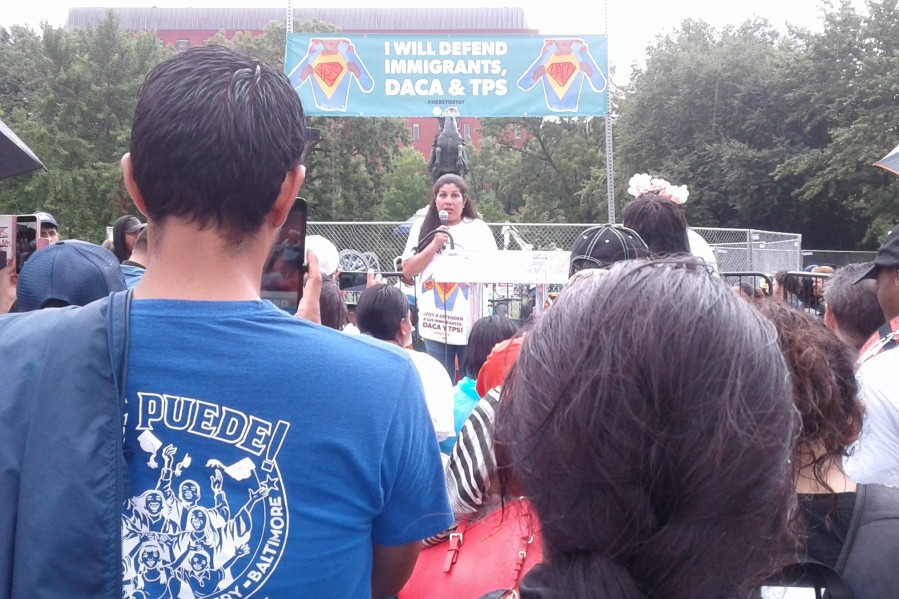 Former NAACP president and Maryland Democratic governor candidate Ben Jealous made brief remarks during the rally: “Just like my father was arrested fighting for Civil Rights in Baltimore, I am willing to get arrested defending immigrants from what Trump, Sessions, and Hogan are doing to them.”

Later Representative Luis Gutiérez (IL-4), gave a fiery speech in which he declared that he will not rest until every immigrant can be guaranteed the right to return home after a day’s work, as he is able to do. He spoke about how five years ago, immigrant groups had been successful in pushing President Obama to put together the DACA program. He called out former Secretary of Homeland Security John Kelly, for not honoring his word that he would protect people who signed up for DACA.

After the event, the rally organized a march towards the White House. Following the march, approximately thirty activists, along with Representative Gutiérez and Ben Jealous were arrested for civil disobedience by the National Park Police. Indivisible co-founders Ezra Levin and Leah Greenberg also participated in the march and were arrested as well. They documented their experience here.

1- @Leahgreenb & I just got arrested standing with @UNITEDWEDREAM in front of the White House. Blog with details: https://t.co/49n95zzbhB

The DC rally was one of many throughout the country to mark the 5th year anniversary of the start of the DACA program. Special thanks to CASA de Maryland and United We Dream for organizing the event, and for all those who stood in solidarity with immigra nts and defended their right to live in this country.