On October 18, the day Muslim Ban 3.0 was to go into effect, federal judges in Hawaii and Maryland ruled against the ban, temporarily blocking it. As #NoMuslimBanEver rallies were held throughout the country, Indivisible Baltimore and Council on American-Islamic Relations (CAIR) co-hosted a #NoMuslimBanEver Town Hall at the War Memorial in downtown Baltimore to show solidarity with the Baltimore-area Muslim community and demonstrate that we would remain united in opposing the Trump administration’s assault on Muslim and immigrant communities.

Congressman Dutch Ruppersberger (MD-2) began with opening remarks staunchly opposing the Muslim Ban: “As a lawyer and former prosecutor, I can tell you that the Muslim Ban is inhumane and unconsitutional. I hope the Supreme Court will do the right thing.” He spoke of Charlottesville and the increases in hate crime throughout the country since Trump’s election and touted his recent amendment setting aside money to help local law enforcement fight White Supremacy organizations – an amendment that was ultimately blocked by House Republicans.

“We have to put Republicans on record for supporting these hateful policies. Most of the country is against them.” – Congressman Dutch Ruppersberger

Ruppersberger tied the Muslim Ban with the rescinding of DACA, as part of a unified effort by the Trump administration to undermine the rights of Muslims, immigrants, and minorities. He vowed to stand up for DACA and spoke out about how he opposed ‘the wall’. 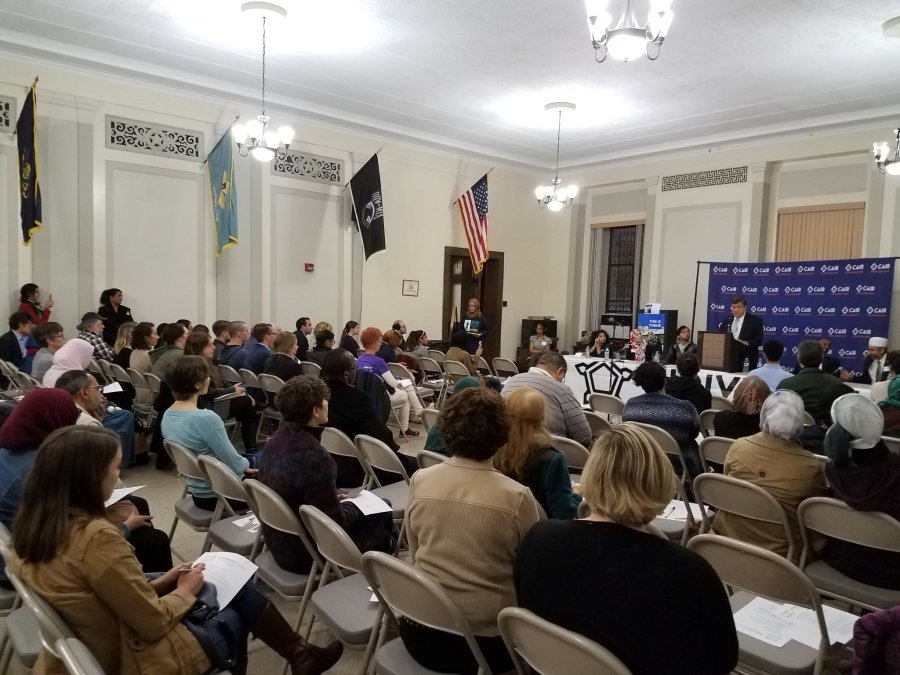 Event moderators Monisha Cherayil  of BMore Indivisible and Zainab Chaudhry of CAIR facilitated a discussion among invited guests on the impact of the new Muslim Ban. A Muslim college student recounted a story of how a young Syrian student barred from seeing her family; another  spoke of a Somali imam being unable to bring his mother to this country, highlighting the real human costs of the ban.

Next a panel assembled to discuss the Muslim Ban in terms of its broader effects. Imam Earl El-Amin, of the Muslim Community Cultural Center of Baltimore, acknowledged that the political situation with Trump as president was grave but exhorted the audience to seize the opportunity to fight for justice and against oppression. 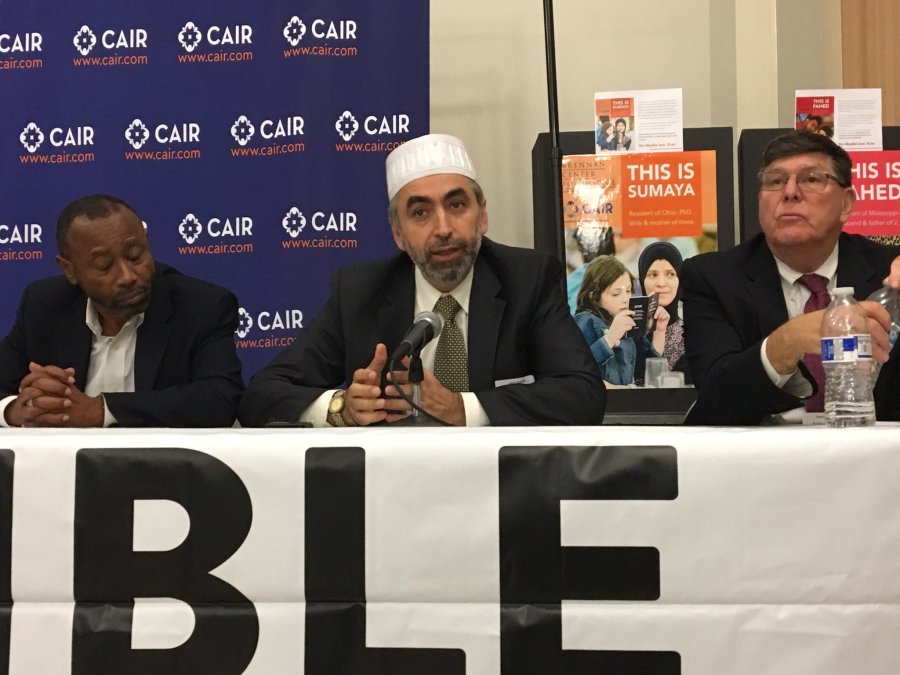 “American Muslims live like Muslims no where else in the world – in an incredibly diverse and tolerant society. In the end, it will be American Muslims that will bring reform to other Islamic countries, because of their unique experience here.” – Imam Bashar Arafat, Civilizations Exchange & Cooperation Foundation

Rabbi Charles Feinberg of the Interfaith Action for Human Rights spoke of how his Jewish faith compelled him to stand up for all those who are discriminated against: “The state should not say one religion, one race, or one ethnic group is greater than the other.”

Amhed Mohamed, an attorney at CAIR, explained the legal strategy behind the Muslim Ban. He summarized the recent federal judge rulings in Hawaii and Maryland that blocked the latest Muslim Ban and explained their differences in terms of scope. He described how the Trump administration added two additional non-Muslim majority countries in their list purely to be able to make the claim that it was not exclusively Muslim. He explained how Trump’s own Tweets and personal statements, calling for a “total ban of Muslims entering the US” was being used against him in court. Finally, he emphasized that the recent federal rulings were likely only a temporary setback from the Administration, and that the final decision on the legality of the ban would ultimately fall to the Supreme Court.

“National security is nothing more than pretext for discrimination against Muslims. Trump’s religious animus is clear.” – Amhed Mohamed, Attorney at CAIR

Ilja Shpitser, a professor at Johns Hopkins University, outlined the impact that the Muslim Ban has on Muslim students: “Immigrants are what makes our science the best in the  world. We attract the best students from all over the world. They all want to come here to do research – and we in turn benefit from that as a country. The Muslim Ban cripples young Muslim students and scientists by preventing them from going to conferences and participating in the international scientific community.” 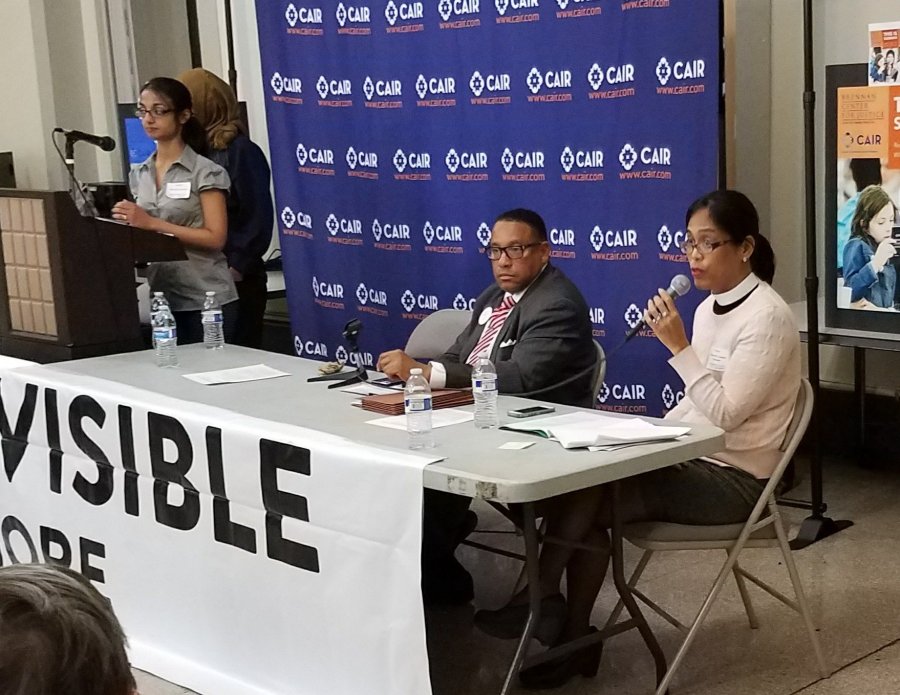 Baltimore City District 41 Delegate Bilal Ali, the first Muslim to represent Baltimore City, addressed the long history of discrimination in US from Japanese internment camps in World War II to the discrimination of Muslim communities after 9/11. Reverend M. Cristina Paglinauan, from The Church of The Redeemer in Baltimore spoke about the importance of standing in solidarity with those who belong to groups that are being discriminated against.

Audience members asked questions about how new bans could be prevented in the future. The response from the panel was unanimous and unequivocal: share stories, forge relationships, make connections with people from different backgrounds.

Imam Arafat conceded that the Muslim community also had a responsibility to make more of an effort to reach out to others on a regular basis – not just on special occasions. But he added that he was hopeful that America would continue to be a tolerant place for Muslims:

“At the BWI protests [in February], there were thousands of people, and most of them were not Muslim. Yet they all came out to support us. It was very inspiring for me. I tell people in other countries, the American people are good, they are with us.” – Imam Bashar Arafat, Civilizations Exchange & Cooperation Foundation

A member of Catonsville Indivisible asked about the line between free speech and hate speech. She described a recent event in Catonsville in which a public immigration forum was cancelled after local progressive groups vowed to protest the inclusion of an anti-immigrant hate group. Amhed Mohamed spoke about the importance of the first amendment and suggested that instead of blocking hate groups from speaking, activists should focus on bringing more of their own supporters to drown out the hate groups. 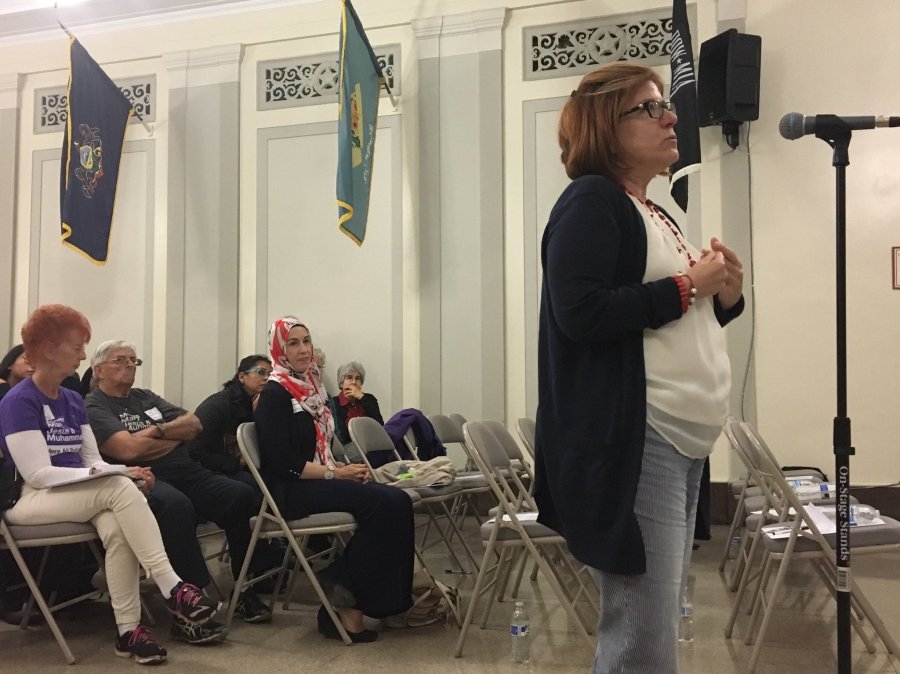 As the town hall wrapped up, moderators Monisha Cherayil and Zainab Chaudhry urged members of the audience to stay engaged and asked them to call their Senators and Representatives and ask that they support legislation making the Muslim ban illegal. Volunteers collected postcards with questions and comments for their elected representatives and distributed information on how to be more involved in fighting for Muslim and immigrant rights. 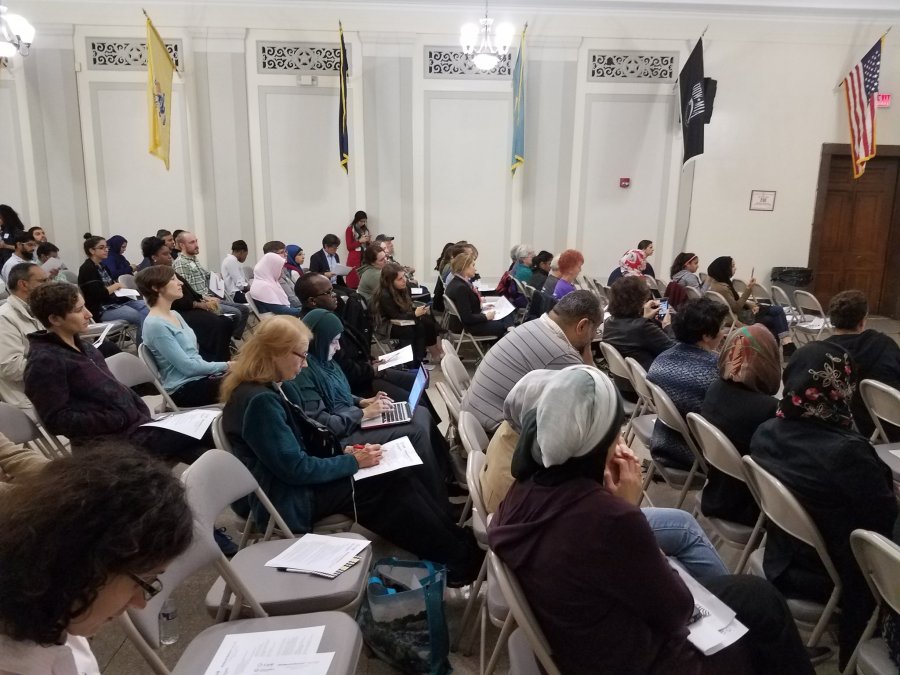 We want to thank all the speakers, panelists, volunteers, and guests who made the #NoMuslimBanEver Town Hall a success. We also want to thank Congressman Ruppersberger for taking the time to participate in the town hall. Finally, we would like to remind you that BMore Indivisible and Indivisible Baltimore are entirely volunteer-run organizations, and depend on crowdfunding from supporters like you to help put on these events. Please consider making an online donation to help pay for #NoMuslimBanEver Town Hall today!