In the past two weeks, Indivisible Baltimore teamed up with local activist groups to organize and/or promote two rallies held in downtown Baltimore to protest the Trump administration’s cruel family separation border policy and the Supreme Court decision upholding the Muslim Ban, overturning decisions by numerous lower courts. Both rallies featured wide coverage by local media, highlighting just how important these issues are to people in the Baltimore area.

On June 20, Indivisible Baltimore participated in a protest in front of the ICE Customs and Border Enforcement Office in downtown Baltimore organized by Teachers Defending Immigrant Families (TDIF). Over two hundred people showed up for the event, which as also attended by Representative John Sarbanes. 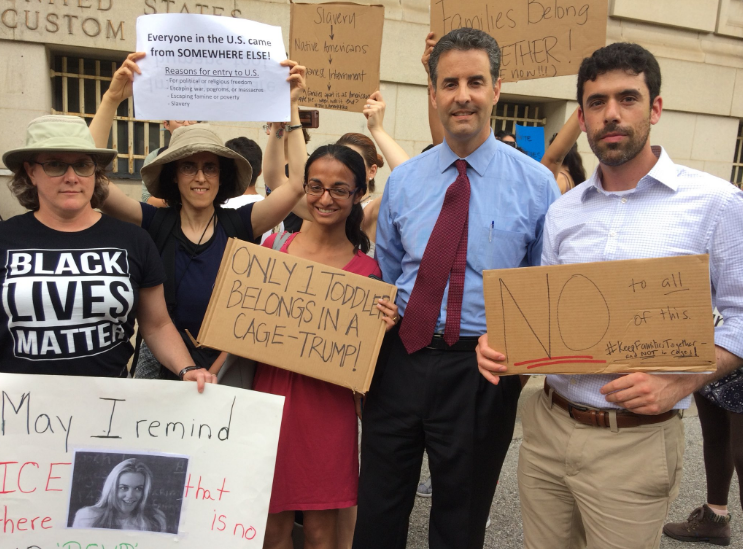 Earlier that day the Trump administration issued an Executive Order ending forced separation of children but mandating indefinite detention of families. It was clear from those in attendance that this was not a solution. More pressingly, people demanded to know what would become of the over 2,000 children that had already been separated.

“His claim to be fixing the policy by saying that kids and families can stay together doesn’t make anything better because he’s just locking the kids up with their parents.” – Monisha Cherayil, Indivisible Baltimore, WMAR-TV, June 20, 2018

For more information, follow coverage of the rally by WMAR-TV.

On June 27, Indivisible Baltimore, Council for American Islamic Relations (CAIR), and CASA de Maryland held a joint press conference and a rally outside City Hall to protest the Supreme Court decision upholding the Muslim Ban. It was attended by over a hundred protesters and featured speakers including Zainab Chaudhry (CAIR), Sid Chaudhury (Indivisible Baltimore), City Councilman Zeke Cohen, and District 45 Delegate candidate Stephanie Smith. Speakers stressed the importance of solidarity between Muslim and Latino communities, and all communities of all people of color.

Speakers affirmed that the Supreme Court decision does not represent American values and vowed to fight in November to elect Democrats to change the laws and hold this administration accountable.

As an immigrant, I was raised to keep my head down and stay out of trouble. But now is not a time to keep our heads down. Now is a time to cause some trouble. We must make sure Republicans lose across this country, up and down the ballot, in November. – Sid Chaudhury, Indivisible Baltimore, Baltimore Sun, June 27, 2018.

For more information about the event, please follow coverage by the Baltimore Sun, WMAR-TV, WBAL-TV, and WJZ-TV.